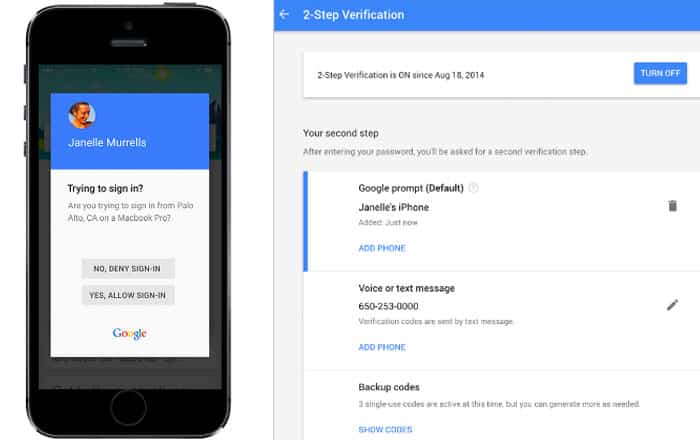 Two-step verification has become an absolute necessity in this day and age when hacking has become an increasingly common occurrence. However, many people choose not to opt for it due to the hassle of having to go through extra steps to access their account. Google now has a solution to this dilemma with a simple solution of its own.

Dubbed Google Prompt, the new feature allows users to approve sign-in requests right from their phone. For instance, if a person tries to sign into their account on their laptop, the tool will automatically trigger a window on the handset asking a simple yes or no question whether to allow or deny it.

This Google missive asks the consumer if they’re trying to sign in and contains information like their name, profile picture, city the log-in is taking place in, and the device it’s taking place from. The entire process is pretty straightforward and is significantly less time-consuming than having to enter a verification code or using a Security Key.

However, it should be noted that Google Prompt requires a data connection to work. Furthermore, the feature can’t be enabled alongside Security Keys, so people will have to choose one or the other. Conveniently, the new tool is baked into Google Play Services and will be rolled out to all Android users gradually over the course of the next few days.

iOS users can also access Google Prompt, as long as they have the Google Search app installed in their handset. Interested users across both platforms can activate it by heading to their My Account page and allowing two-factor authentication.