Google is brewing a WhatsApp rival for emerging markets, Hangouts being ignored

In news that is making little sense at the moment, Google is reported to have been working on a WhatsApp competitor which will be targeted towards emerging markets, with the main one among them being India. There is the big question why not use the already established Hangouts to achieve this objective, and only a few reasons for that can be cited.

Firstly, Hangouts needs a Google account for it to be used, which is not that big an issue to handle for users, but it’s still something WhatsApp doesn’t care to ask for. The second big reason is that Hangouts is at its roots a web chat application and it still works as across the web and smart devices. 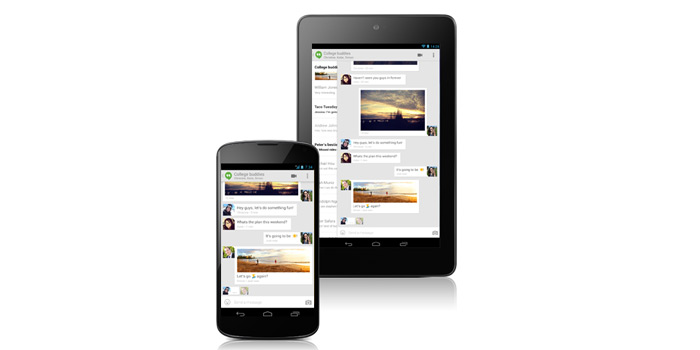 With the kind of popularity services like WhatsApp, Line, WeChat and more enjoy on almost all mobile platforms including Android, iOS and Windows Phone in emerging markets, Google sure would want a piece of the pie. This is believed to be the prime reason it had wished to purchase WhatsApp not too long ago, but things didn’t turn out as the company wanted them to, and the application eventually landed into the kitty of its rival Facebook which is using it for its own benefit in the emerging markets.

According to sources of The Economic Times, Google sent its top product manager, Nikhyl Singhal to India recently in order to perform a recce of the messaging app ecosystem in the country. This messenger is in its very early stages of development, so it’s most likely to be launched in 2015 with local language support and more.

Google’s interest in India and other emerging nations is evident not only through its bid to challenge WhatsApp and other messenger applications that are thriving here. Android One, one of its most ambitious projects till date was also given the green light in India recently, and is being promoted by the search giant in a huge way, mostly through traditional advertising means.