Off late, joining beta programs on the Google Play store has become quite a widespread activity. The developers of this app have recognized this and have decided to make this process simpler than ever.

The newest version of the Google Play store is being shipped right now, and it comes with the ability to join and even leave betas right from within the app itself. However, we have noticed a large number of discrepancies in this feature; so we’re hoping the search giant gets around to removing them from its next version.

We grabbed the 6.7 version of the Play store, and while the we could easily see the Join and Leave beta options at the start, they have seemingly disappeared now. Perhaps, Google has pulled those features server-side in order to make some changes to them. 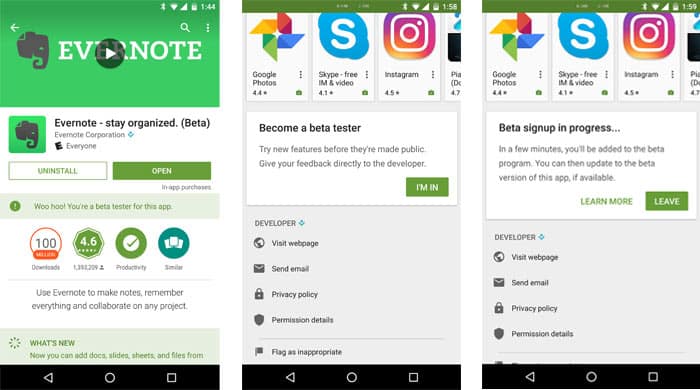 Anyway, we’ll tell you exactly what you’ll see once the final release is up on your devices. If you happen to be enrolled in a beta for a particular app, you shall see a proof of the same at the top of app listing.

Plus, if you aren’t part of a beta and wish to be, you can do by just tapping a simple Join button. It will take a few minutes for you to be enrolled, but it’s much easier than the earlier processes which involved downloading APK files from other websites, signing up for Google+ communities or other such bothersome things. There will even be a tab for leaving developer feedback rather than writing a public review.

You can download an APK of this Google Play store update through this link (via Android Police). And if you can’t see the changes even after installing it, it’s possible Google has pulled them back to release them in a further version, as that’s what has happened to us.