With third-party app makers having started granting Material design overhauls to their utilities already, Google’s very own Play store wouldn’t want to stay behind. The developers over at Mountain View have dished out an update to this app which grants it a whole new look that’s in line with the kind of design blueprint we’ll be seeing in the Android L release scheduled for later this year.

This update is gradually appearing on devices worldwide, so be patient if you haven’t received it yet. It revamps everything from the way apps appear in the storefront to all other important elements of the Google Play store. Its alignment to the Material design philosophy means a much flatter and layered look, among other things. 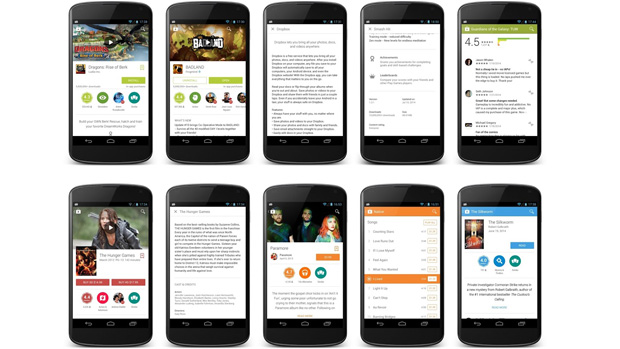 Graphically intense, this new version of the app gives greater prominence to pictures and videos than the previous editions. Stuff like reviews and ratings have been given dedicated icons, whereas changelogs of apps have been granted prominence over their descriptions.

This means, if you have an app installed on your device and you happen to visit its Play store page, you’ll first be greeted with the ‘What’s New’ section, while you need to scroll further in order to see the app description. Additionally, the description will now open into a full page layout when tapped on.

Our latest update is rolling out right now! We're excited to share a sneak peek of what you’ll get in the coming days pic.twitter.com/k5BidxR4Vu

Buttons meant for +1-ing and sharing have been moved below the featured reviews section, while there’s much more new stuff to experience as well. The updated Google Play store should reach you in the days to come, but if you can’t wait till then, head to Android Police to download an APK of it.