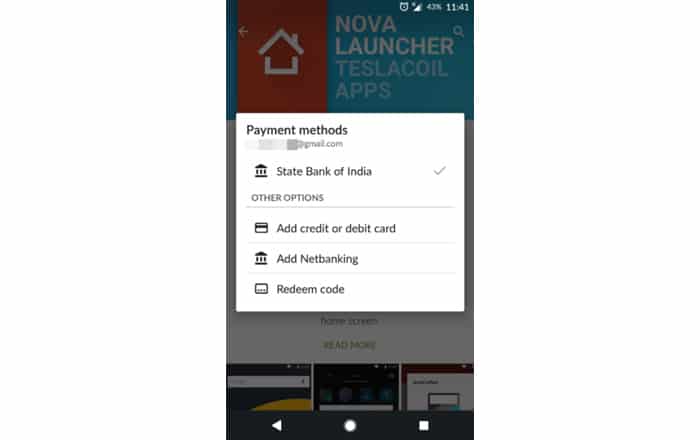 Google seems to be rolling out a Netbanking option in its Play Store for Indian consumers going by a new report. The platform has so far only let people pay via credit, debit, and gift cards.

The addition of Netbanking should be welcome news to Android users in India. They can now directly buy apps, books or movies on the Play Store via their bank account. Google appears to have tied up with a number of different banks for the endeavor.

Google’s move will likely go a long way in encouraging people to buy apps in the country, especially since Android is the dominant player in the smartphone sector in the nation. The brand had previously rolled out a carrier billing scheme in association with Idea to provide another alternative to regular payment options.

Under the scheme, Idea customers will get charged for apps, movies, books and games directly from their prepaid balance or postpaid bill. The service isn’t completely free though. Buying something worth Rs 10 will result in a Rs 1.50 convenience charge. It’s up to the consumer to decide whether this additional amount is worth the convenience.

Android Police reports that the Play Store may also be getting a Trending section for entertainment which focuses on media such as new movies and music, showcasing things like trailers, soundtracks and videos related to the topic. The company may also be looking to change up the entire UI of the platform with fresh color schemes and larger buttons.