The Google Play Store has just been blessed with two big changes in the form of the early access program and the beta testing features which were earlier released and rolled back for some reason. While the former appears to be a server-side change, the latter likely comes via the latest version of the app (v6.8).

The Early access program was revealed by Google during its I/O event last month. It allows you to download and try out apps that are still to be released. This way, you can test these unstable apps and perhaps give some feedback to the developers as well.

It’s hence that these apps cannot be rated or posted reviews for. You can just contact the developers via email. If this trait is live for you, you might find a huge banner for it on opening the Google Play Store. Otherwise, you can access it from the Apps & Games section where you need to select the Early Access tab from the many green-colored tabs that are present there. 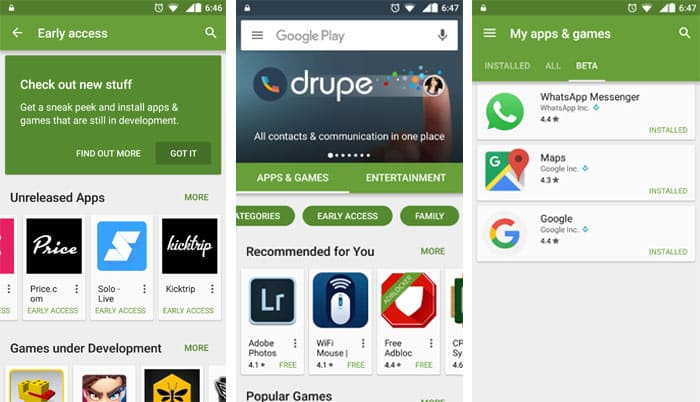 At the moment, there are two sections in the early access category, with one being ‘Unreleased Apps’ and the other ‘Games in Development.’ The apps and games you’ll see here will vary depending on your region of course.

Coming to the Play Store beta program, you might remember Google having brought this feature in-app not too long ago. It turned out, that the company rolled it back for some reason, and it’s only now that it has been made available again.

If an app has a beta program available, you’ll now be able to join or leave it via the Play Store itself. Plus, there’s a separate section on ‘My apps & games’ page to denote the apps whose betas you’re signed up for.

It might take some time for these changes in the Google Play Store to appear for you, since such updates are pretty arbitrary most of the time. We have version 6.8 installed on one of our devices, and are seeing both the new features in the app. You can download it from here thanks to Android Police.