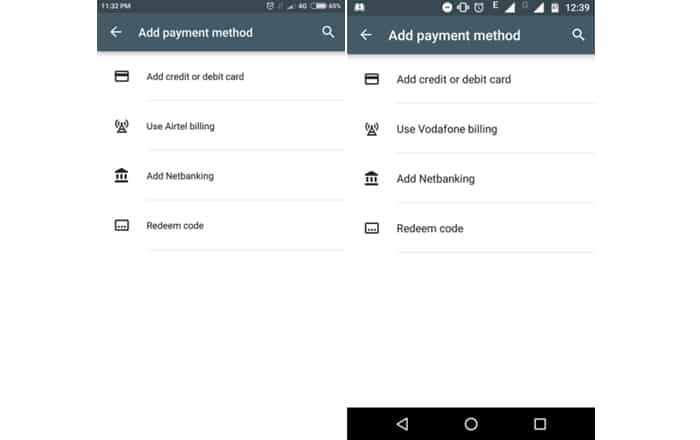 Google seems to be in the midst of adding Vodafone and Airtel to its list of supported carriers in the Play Store. The two have started showing up as an option among a number of users, indicating a broader release is likely on its way.

To recall, Google and Idea had joined hands back in May this year to introduce direct carrier billing in India. The choice lets customers buy apps, books, games, movies, and in-app purchases and charge it to their service provider automatically, eliminating the need to go through additional steps.

It looks like Vodafone and Airtel subscribers will now be able to take advantage of direct carrier billing as well. News of their arrival had actually been announced in October 2016 at Google’s Playtime event in India. The past few weeks have seen a number of individuals get access to the two as a preference in the payments page.

The service only appears to be restricted to postpaid consumers as of now. Some users claim that the authorization SMS doesn’t show up for them to opt-in for the system. Things don’t seem to be fully official yet given the fact that only Idea shows up in Google’s support page for payments.

It’s not clear yet whether or not carrier billing for Vodafone and Airtel will shift towards prepaid customers as well in the future. Both postpaid and prepaid Idea users had access to the method upon its launch. It should be noted that a convenience charge of Rs 1.50 was imposed on buying something worth Rs 10 at the time.

This additional expenditure might put some people off carrier billing. They can then opt for the new Netbanking option or for the standard debit, credit or gift card alternative.