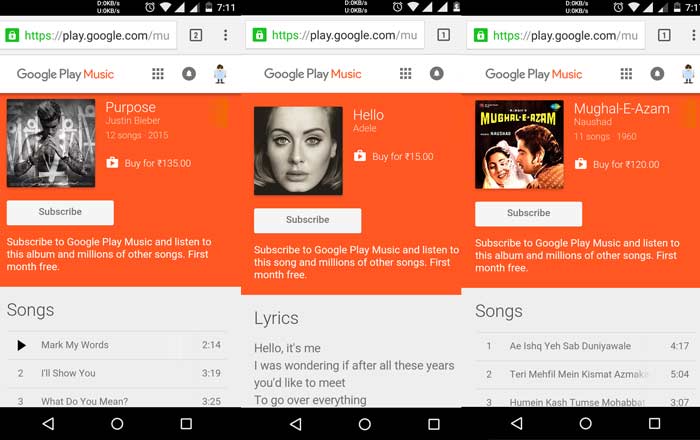 Google may be gearing up to unleash its Play Music and YouTube Red streaming services in India soon. Both weren’t accessible by consumers in the country so far, but this could change if the fresh set of rumors proves to be accurate.

A number of Reddit users can now access the web version of Google Play Music. Based on the above screenshots, the platform will ask people to fork over Rs 15 per song and between Rs 95 and Rs 135 for the full album. Selection appears to span international ones like Adele and Justin Bieber to more local fare like Lata Mangeshkar and the Mughal-E-Azam soundtrack.

Play Music will have to battle against a number of established music streaming apps like Saavn and Hungama in India. Cost effectiveness is key in the nation, and the two already have a large user base in the country. Google will also have to compete against the likes of other international players like Apple Music which landed in the subcontinent last year.

One of the main highlights of subscribing to Play Music is the free access to YouTube Red that’s thrown in to the bargain. In that light, it would make sense for the two to arrive together in India. Users in the country have begun receiving notifications telling them about the service.

YouTube Red allows consumers to watch videos without any annoying ads. It also lets them save videos offline and play it in the background. Google notably announced a special limited period offer for US patrons to celebrate July 4 in the country recently, giving away 4 months of Play Music and YouTube Red for free to first-time users of the service.

There’s no indication of Google Play Music’s subscription fee in India yet. The streaming platform is priced at $9.99 (roughly Rs 670) per month in the US.