The 5.4 version of Google Play Music has been released by the search giant, and this edition of the app brings with it a whole lot of new features that should definitely delight its fans. Prime among the new additions is the ability to cache radio stations within the app for offline playback.

As pointed out by Android Police, this feature works with the ‘Keep on device’ option that’s been added to the app. With it, you can pre-cache entire radio stations for offline playback, and listen to your favorite music even when you’re not in the range of any Wi-Fi connections. It should be noted however, that the ‘I’m feeling lucky’ radio station won’t be eligible for this trait. 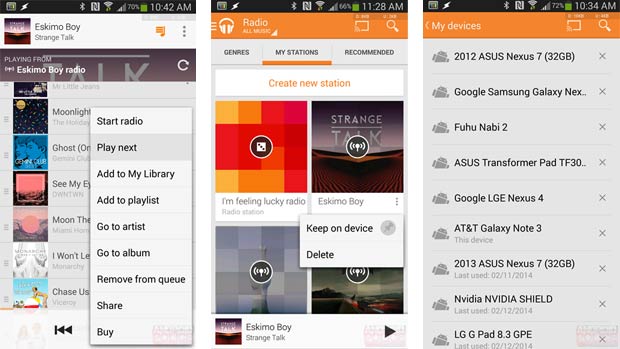 Another welcome addition to the Google Play Music app is the ability to manage and deauthorize devices on phones or tablets, thus eliminating the need to use the web interface for the process. A Play Next button also makes its way into the new software, allowing you to easily switch tracks while listening to songs and albums. Other changes also include a relocation of the Cast button which has moved from the top bar to the bottom one.

All these and many more new changes have been granted to the Google Play Music app, but seemingly, it’s only available in some parts of the globe as of now. For those who don’t want to wait for it, the above mentioned site has already put up mirrors for you to download the 5.4 version from.