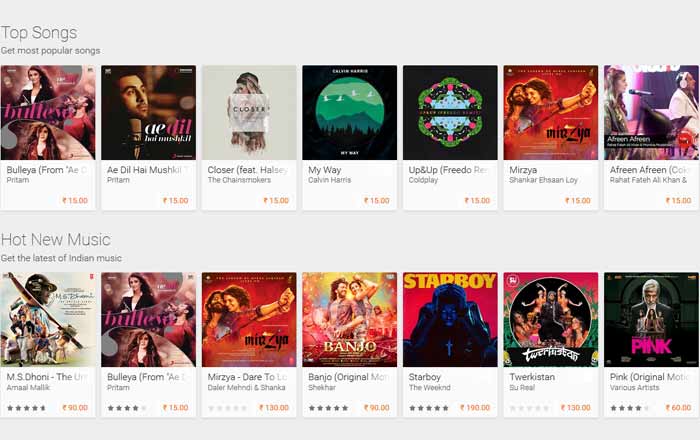 Google has finally launched its Play Music store in India just a day after it announced a slew of new products for the country. The company hasn’t officially announced the platform yet, but it’s now open for both desktop and mobile.

To recall, rumors about Google Play Music’s arrival in India began in July this year. It’s taken a few months since then, but the store is now ready for business. Songs start at Rs 15 a pop and albums are priced between Rs 70 and Rs 200. There are a wide range of genres on display for both regional and international music enthusiasts.

Google also hasn’t brought along Play Music All Access, radio, and its family plan. The first allows users to pay a subscriptions fee to stream an unlimited amount of music. One feature it has introduced is the ability to upload a maximum of 50000 songs from a user’s personal collection via Chrome so that they can stream the tracks from their phone.

Google will now be competing against the likes of Apple Music, Gaana, Saavn, and Wynk Music for music streaming domination in India. While the search giant is at a disadvantage since it’s arrived so late in the game, the one major factor that it does have going for it is the fact that Play Music comes preinstalled in all Android devices.

Android dominates the smartphone sector in India, meaning Play Music could serve as a person’s first and last destination for streaming songs. Google’s made the process of buying stuff easier as well, since it offers the option of purchasing physical Google Play prepaid vouchers with cash, effectively avoiding the need to have a credit card to buy items.

You can check out Google Play Music via its Android or Web avatar.