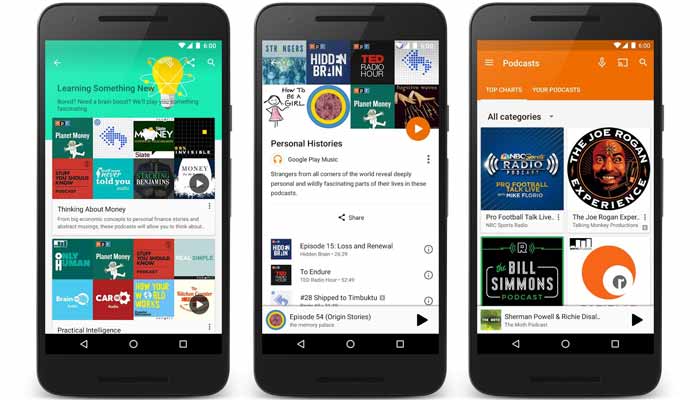 Podcasts have been steadily rising in popularity for quite some time now and it looks like Google has finally sat up and noticed. The tech behemoth has set up a dedicated section for fans of the medium in its Play Music app.

It’s not a total bolt from the blue given the fact that Google had launched a portal for podcasters to add their shows to Play Music all the way back in October. The brand is the latest music platform to include a separate space for podcasts, iTunes having done it years ago and Spotify more recently.

Google will now be competing with various third party apps like Pocket Casts for the attention of users. The fact that Play Music is baked into Android should help it get a leg up over its rivals, but its interface and offerings will be the ultimate decider of whether a listener sticks to it or not.

To that end, Google has tried to focus on creating an experience for podcasts by creating curated sections for a person to choose from depending on how they’re feeling or what they’re doing. The company has basically taken the concept of its contextual playlists for music and applied it to podcasts.

In a blog post, Google claims the layout has been designed to make it easier to wade through the thousands of choices available to users right now and pick something appropriate, whether the individual is a first-time listener or battle-worn podcast fan.

For instance, people who feel like soaking up some knowledge could try the Learning Something New section with podcasts like Stuff You Missed In History Class and How To Do Everything. If comedy is more their style, they can check out shows like WTF with Marc Maron or The Nerdist.

Users can choose to subscribe to a show and receive the latest episodes automatically or get a notification when a new one drops. Sadly, the new podcast section in Google Play Music is only restricted to the US and Canada for now, with no word on when it’ll hit international waters.

The updated Google Play Music app is rolling out now and can be downloaded here.