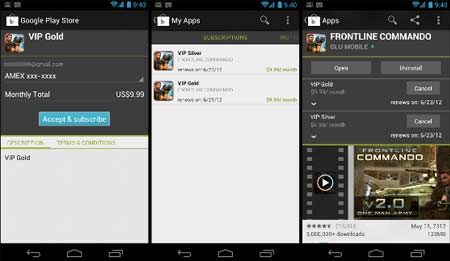 While in-app billing has been a part of Google’s app store services for over a year, the search engine giant has now introduced in-app subscriptions for applications in the Google Play store. With this new option, the company has enabled developers to sell monthly or yearly subscriptions from their apps using in-app billing, reports the official Android Developers blog.

According to the post, developers are responsible for setting prices and billing intervals for their apps, while Google will take care of transactions of these auto-renewing subscriptions, just as it does for other application purchases. Besides informing users about the price and billing details, Google Play will also be managing recurring billing along with notifying them about additional charges. These subscriptions can also be cancelled by visiting the ‘My Apps’ section in the Play store.

“Building on Google Play’s strength as a truly cloud-connected experience, developers can offer users the ability to carry their subscriptions across multiple properties, services, or campaigns. To make this easier, we’re introducing an HTTP-based publisher API through which enterprise-scale backend servers can validate or cancel subscriptions. Using this API, for example, developers can extend access from their Android apps to their web properties, based on subscriptions that are purchased on Google Play,” reads a post by Dirk Dougherty on the official Android Developers blog.

Application designers can use in-app subscriptions to monetize journals and magazines as well as to sell digital content such as game levels, music, videos or other value-added services. Android users can expect the launch of a number of subscription-based applications, some of them being titles from Glu Mobile. Developers will not have to make major changes to their codes for the new attribute, if they are already using in-app billing.

In-app subscriptions are now available for users who have Google Play 3.5 or higher installed on their Android devices.