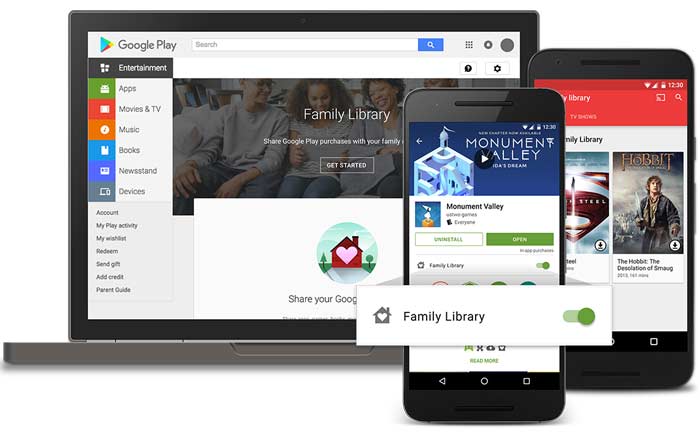 Google has officially launched its new Play Family Library feature, a few weeks after it became available in a few countries. The tool allows you to share apps, movies, TV shows, games and books with up to 6 people across devices.

Google Play Family Library is free, so you won’t have to pay an additional fee to get started. You just have to activate it and submit a credit card as your clan’s payment method. However, individual members also have the option to pay using their own credit or gift card.

Once Family Library has been set up, you can choose to keep items in your sharing or personal collection. It should be noted that not all items available in the Play Store can be shared. Only eligible products are allowed to be distributed. All such purchases will be available across Android-running devices like laptops, smartphones and tablets.

Interestingly, books, movies and TV shows can additionally be accessed through iOS devices and the web, meaning iPhone-carrying relatives won’t get left out. Moreover, you can opt to supervise younger members of your family by approving each purchase they make. It should be noted that music isn’t a part of Family Sharing.

You’ll have to subscribe to the Google Play Music family plan for that. It’ll set you back by $14.99 a month and can be shared among 6 members. It was launched earlier this year and is now being expanded to New Zealand, Mexico, Ireland and Italy.

As for Family Sharing, the feature is currently rolling out and will be accessible by people living in Germany, Australia, Canada, the US, the UK, Brazil, France, Mexico, Italy, Japan, New Zealand, and Ireland.