Google has officially sent out media invites for an event taking place on October 4 in San Francisco. While there’s no indication of what to expect from the occasion, the company will probably be launching its latest smartphones.

Rumors so far indicate that these handsets will be unveiled under the Pixel moniker instead of the Nexus name. The switch is apparently meant to indicate that the new offerings are Google phones rather than just a collaboration between the tech giant and a manufacturer. HTC is supposedly still putting the devices together, but its branding won’t be seen on them.

Google’s new teasers for the October 4 event hint at the possibility of such a massive change in its strategy. First-off, it’s released a video which simply depicts a search box that eventually morphs into the shape of a smartphone. Diving into a bit of speculation, it’s feasible that the firm is trying to call back to its roots as a search engine and this handset is meant to be a culmination of its first major success.

The second teaser has been presented in the form of a website. The aforementioned video is played when the page is opened before pictures starts appearing inside the outline of the phone. Notably, the site is called Made by Google. If that’s not enough of a hint, even the brand’s tweet linking to the page contains the term #madebygoogle. 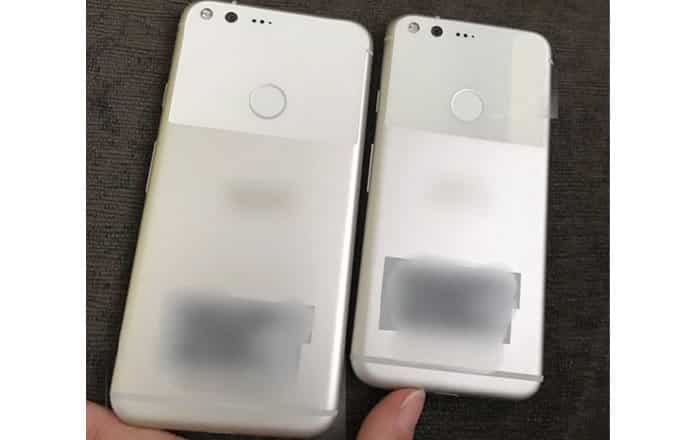 The new Pixel and Pixel XL were recently leaked in the form of two images. The photos of its back seem to be pointing towards a metal body with a glass panel adorning the top half of the rear surface. Not much can be gleaned from the snaps of its front. Previous reports claim the former has a 5-inch screen and the latter a 5.5-inch one.