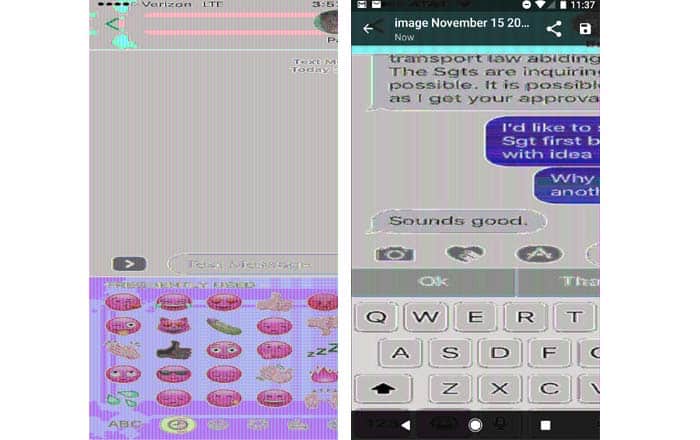 Pixel and Pixel XL owners are apparently facing a bizarre compatibility issue with screenshots sent from the iPhone 7 and iPhone 7 Plus. Instead of receiving normal images, the photos appear distorted and fuzzy on Google’s flagship devices.

Reports of the strange bug recently started appearing on Google’s product forums. According to a Pixel user named Pat OBrian, screenshots from an iPhone 7 Plus which are sent to him as an MMS come across as warped. The problem excludes snaps of the handset’s home screen. However, it raises its head when the shots are taken from any native or non-native app.

OBrian at first claimed that screenshots from an iPhone 6, 6S and 7 are fine. However, he later said that screencaps taken from an iPhone 7 were arriving deformed as well. The issue persisted even when capturing the display in landscape mode or operating in Safe Mode, the latter eliminating the possibility that third-party apps are the culprits.

OBrian says he got in touch with Google Pixel support over the issue. They supposedly couldn’t make head or tails of the problem and did not offer any useful advice or information. Other owners in the thread are also reporting instances of the unique bug. It notably doesn’t happen in reverse when a Pixel screenshot is sent to an iPhone.

While the reason behind this flaw has not been determined as of now, one prevailing theory states that there might be a something going wrong with how image processing is handled in Android 7.1 Nougat. Android Police cites one person who says it’s occurring in their Nexus 6 running the OS through an AOSP-based custom ROM.