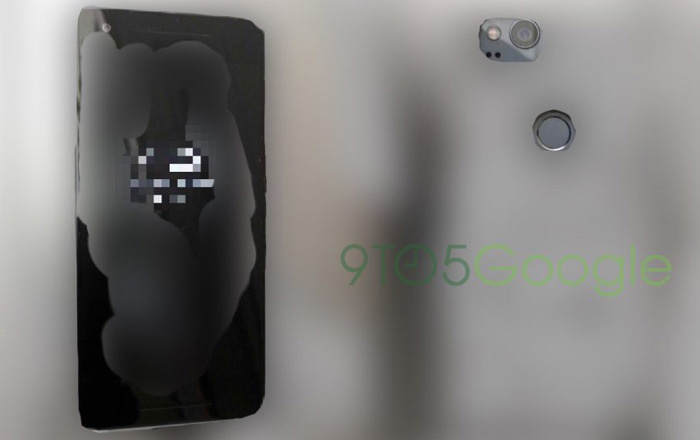 The Google Pixel 2 has become the subject of a massive leak which reveals and confirms all kinds of information about the upcoming smartphone. 9to5Google has gotten its hands on a couple of images of the smaller model from a trusted source, although the photos have been blurred to protect their identity.

One snap showcases a Pixel 2 with a slate gray glass window, a dark silver back, and black front. This is a bit different from the black glass + black rear combination which has frequently surfaced online. The shots also afford a closer look at the handset’s camera, proving that there will be laser detect autofocus given the presence of 2 small dots below the camera flash.

The Pixel 2 will probably ship in 64GB and 128GB storage variants, which in turn means that Google might have abandoned the 32GB option. The smartphone is expected to be a bit more expensive this year as a result. The same large bezel design will be present around a 4.97-inch 1080p display. The larger XL version is likely to feature smaller borders more in tune with current trends.

Also Read: HTC may sell its smartphone business to Google

Google is apparently moving straight ahead with its plans to ditch the 3.5mm headphone jack and opt for dual front-facing speakers. However, an anonymous source claims that there’s a lot of talk internally about damage control regarding its removal. This is to be expected since the company made a big deal about retaining the port post the iPhone 7 controversy.

Like the iPhone 7, the Pixel 2 is also expected to ship with a USB-C to 3.5mm dongle. There may even be a Google Assistant-powered wireless earphones in the mix, but it’s not clear if it’ll be included in the box or be sold separately. Both variants of the smartphone are also said to be waterproof thanks to an IP68 rating.

Google is supposedly going to focus on the camera’s low-light performance and include an always-on option for the ambient display. Finally, the Pixel 2 and Pixel XL 2 are likely to get the same set of specs with the exception of the display. The duo is probably going to run on Android 8.1 Oreo from the get-go and come out on October 5.