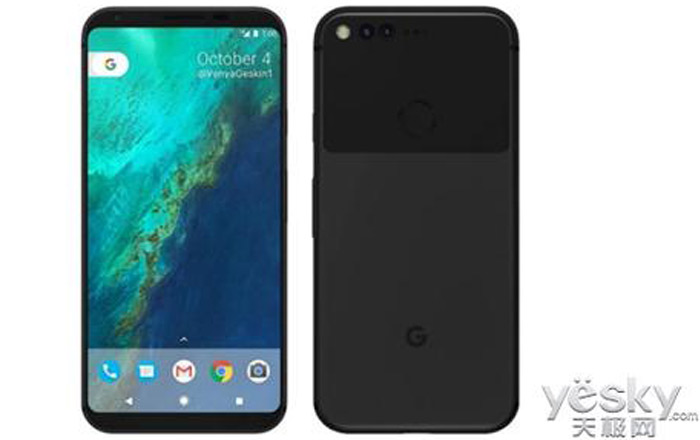 Google’s next Pixel 2 has just gotten leaked in two separate instances, with one showing off an alleged render of the regular version and the other revealing key specs related to the larger XL version. There’s no mention of the largest XXL model in either, leaving it under a shroud of mystery.

Starting off with the image, the so-called Pixel 2 seen in the photo above features a minimal bezel design, keeping in line with the overall trend of 2017 to ditch borders and expand on screen real estate. There is also a pair of dual cameras on its back, another hot trend that Google is yet to hop on to.

Other than these two major differences, the Pixel 2 looks mostly the same as its previous variant. The render may well be a fake, given how easy it can be to Photoshop the original to make it look more like the Galaxy S8.

Moving on to the Pixel 2 XL, a GFXBench listing suggests that the smartphone will feature an unusual 2560 x 1912p resolution through a 5.6-inch screen. One explanation for this unique combination is that the phone will have a roughly 2:1 or 18:9 aspect ratio, just like the LG G6 and Galaxy S8.

Another reason could be that this is simply a discrepancy on the benchmark’s part where it’s not taking into account the Pixel 2 XL’s navigation bar at the bottom. If accounted for, GSMArena says the resolution comes to the standard 2560 x 1440p, while the size would actually be 5.7-inch diagonally.

As per the rest of the listing, Google may equip the device with 4GB of RAM, a 2.4GHz Snapdragon 835 processor, a 12MP primary camera, an 8MP selfie snapper, and 128GB of ROM. The smartphone was tested on Android 7.1.1 Nougat, but it’s more than likely the company will send it out to the world running Android 8.0 inside.