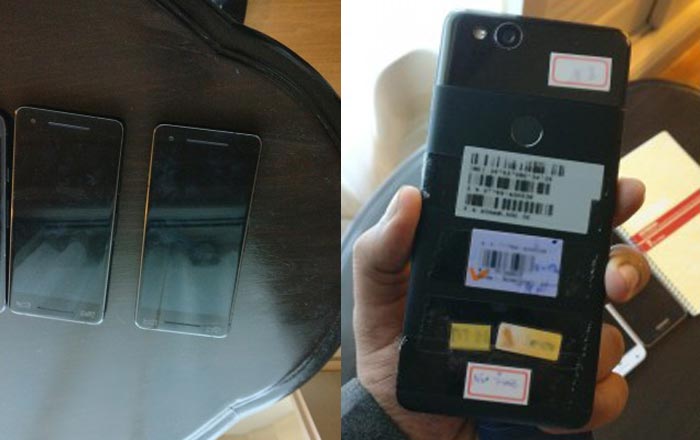 It’s only been a few days since we last saw renders of the Google Pixel 2, and now hands-on photos of the handset have shown up online. The images show off both the front and back of the device, though the view is obscured a bit by a multitude of stickers.

It’s possible the leak is of an early developer unit of the Google Pixel 2 given the abundance of labels. It was sent by an anonymous tipster to GSMArena, so it’s best to view them with a healthy dosage of salt. The design looks pretty similar to the original Pixel, but the overall body seems wider and more rectangular.

The thick bezels spotted in the previous leak are seen here as well. Google is sticking to having an ample amount of border, placing two stereo speakers apiece at the top and bottom. The source claims that the in-hand feel is better than the handset’s predecessor, elaborating that it felt sleek and elegant.

The insider also stated that there was no 3.5mm headphone jack. Going by the images, it appears Google has placed a dual-LED flash unit next to the single camera. The glass portion of the rear surface occupies a lot less space now and extends to the smartphone’s sides instead of just being restricted to the back.

The Pixel 2 is reportedly being manufactured by HTC, while the Pixel 2 XL might be made by LG. This has lead many to speculate whether the former is building a thick-bezel phone and the latter a G6-like bezel-less one. That would neatly explain the disparity in designs from earlier leaks and the most recent one.