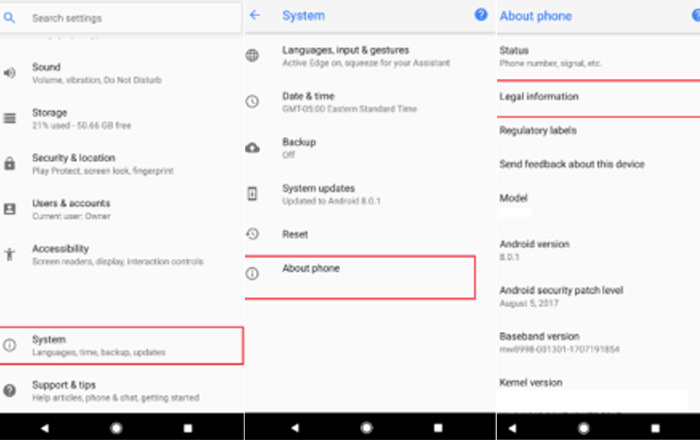 We’ve been hearing a lot about Google’s next Pixel and now an FCC filing has revealed even more about the brand’s upcoming flagship. It seems HTC has been busy dealing with the regulator, submitting various documents including screenshots of the handset’s settings.

To recall, HTC is reportedly making the Pixel 2, while LG is apparently in charge of the Pixel 2 XL. The former is the subject of the recent filing. A quick look at the new Android O Settings app lets slip that the phone is running on Android 8.0.1 with an August security patch.

This is pretty interesting considering the fact that Android O’s final Developer Preview 4 is still on 8.0.0, suggesting that the Pixel 2 will be ahead of the pack at launch itself. It’s also possible that Google is testing an internal build which will be released to Pixels at a later point of time.

Another screenshot reveals something which has been rumored for the Pixel 2 in the past – Edge Sense. Only it’s not called Edge Sense here, but Active Edge. HTC’s squeezable frames come under the ‘Languages, input & gestures’ menu and its skills are currently limited to launching Google Assistant.

We’ll have to wait and see whether Google comes up with anything more innovative by the time the Pixel 2 is ready to be announced. Other intriguing tidbits include 64GB of storage, double last year’s 32GB minimum capacity. There’s also mention of a WCN3990 Qualcomm Wi-Fi chip which ties in with the Snapdragon 835 processor being used.

Previous reports have suggested that the Pixel 2 and Pixel 2 XL will run on a Snapdragon 836 SoC. That chipset hasn’t been released yet, so the duo will be the first to run on it.