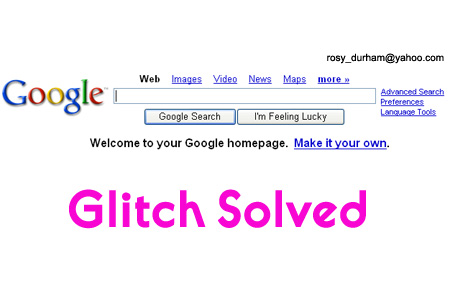 Google has finally resolved a technical issue on its Personalized Home Page service that upset quite a few of the service’s users.

As per subjective evidence collected from discussion forums, Google started issuing a fix to the problem at around 3 a.m. ET on Friday, almost 24 hours after the problem erupted. However, the glitch seems to still be affecting some users at press time early Friday afternoon ET.

The internet giant didn’t declare the problem solved until almost 2 p.m. ET Friday, about 32 hours after the first problem reports started surfacing. A spokeswoman mentioned via email, “A number of Google users had difficulty accessing their settings and preferences on the personalized version of their homepages over the past day.” She added, “Users should have their personalized homepages restored at this time. We apologize for the inconvenience this may have caused our users. We know how important Google Personalized Homepage is to our users, so we take issues like this very seriously.”

“I had four tabs stuffed with content on my personalized homepage. Dozens of RSS feeds, half a dozen bookmark gadgets, friends’ blogs, all my web presences, dozens of other gadgets. I spent weeks tailoring [it] so it was just right for my very intensive internet needs,” a user wrote on a Google discussion group. “Now it’s all gone.”

Personalized Home Page is a free service that lets users add information and “gadget” applications to Google.com and thus create their own Web entry page hosted by Google. Users can display news headlines, weather information and RSS feeds, as well as hosted applications from Google and other providers, like Gmail and Yahoo Inc.’s Yahoo Mail. That way, Personalized Home Page can be tailored as a hub for a user’s Web content, services and applications.

Coming back to the glitch, Google has not given any details on the amount of users affected, nor did it offer an explanation of what happened, in the statement it issued.

The problem, of apparently significant proportions, erupted at around 6 a.m. ET on Thursday, when irate users began flocking to discussion forums to report that their home pages had either reverted to old versions or to their original default settings.

Users of the Google Personalized Home Page service complained about lost productivity and missing data, although throughout Friday morning many reported in discussion forums that their Google home pages had been restored, although some said the problem hadn’t been fixed for them as late as 1:14 pm ET.

The problem is the latest in what seems a regular stream of technical glitches and availability problems affecting Google’s online services. In the past six months, Google services like Blogger, Gmail and Google Apps have all experienced significant technical issues that have left users fuming.

Users insisted on Google to offer a justification for the problem and to let them save their Personalized Home Page settings to their PCs, so that the settings can be restored even if they get erased from Google servers.

Such incidents have impacted numerous other Google services recently, thereby making one obviously question the company’s capacity to offer tough availability for its online services, mainly for those for which it offers uptime guarantees, like the paid version of Google Apps, the suite of hosted communication and collaboration applications for businesses of all sizes.

Earlier this week, Google went back to a plan to do a 13-hour upgrade to its Google Calendar service, which is part of Google Apps, apparently after a considerable number of Google Apps administrators expressed deep concern at the possible impact of the maintenance work on the service’s availability during a weekday and during U.S. work hours.

Furthermore, occurrences like the one affecting Personalized Home Page also wane the position of backers of delivering applications as hosted services. Google is one of the most vocal proponents of the software-as-a-service model, which rivals the traditional approach of having users install applications on their own PCs and servers, of which Microsoft Corp. is a clear example.

In March, the Gmail portion of Google Apps suffered three major outages, affecting even subscribers who have signed up for the fee-based version of the suite, which guarantees 99.9 percent uptime.