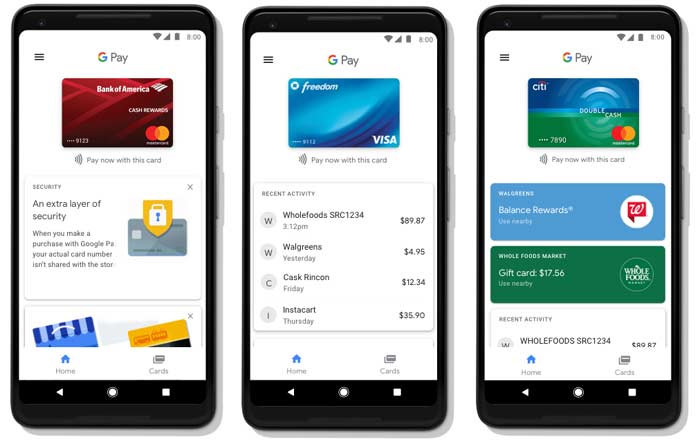 To recap, Android Pay allowed users to store their cards and pay at terminals, while Google Wallet let them send and receive money from friends and family. Google Play will be able to do both, but the latter feature will only go live within the next few months specifically in the UK and US.

The rest will just have to use the new Google Wallet AKA Google Pay Send which has also gotten a revamp. Both apps will be available for all Android devices. Google Pay is actually pretty similar to its predecessor, but the design has been given a makeover to bring it more in line with the brand’s style.

Google Pay’s interface is fairly straightforward. There’s a Home tab to look at recent purchases, easy access to rewards, and nearby offers and stores. Then there’s a Cards tab where all debit cards, credit cards, loyalty programs, and gift cards live waiting to be used at a shop or in an online transaction.

Google claims that it won’t share a person’s actual credit card number when they’re making payments at a store as an extra layer of security. It’s also made it possible to fill out online payment forms automatically when they pick Google Pay at checkout on e-commerce sites.

Even Chrome and Google Assistant will eventually get integrated with Google Pay, along with all other Google products further down the line. Third-party apps and sites can join in as well. For now, you can download Google Pay via the Play Store.