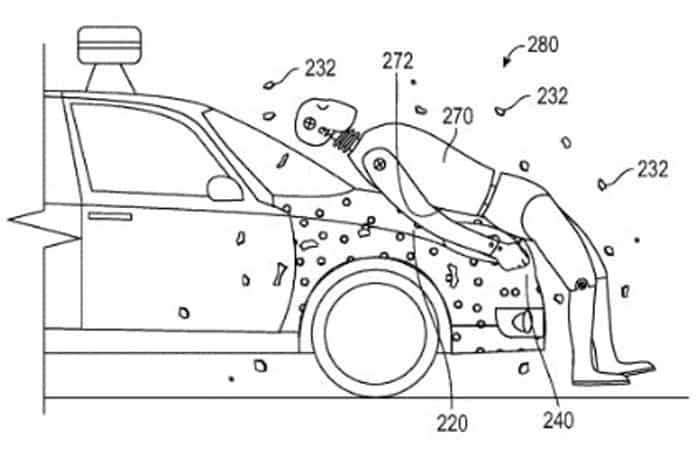 While the advent of self-driving cars has gotten a lot of people excited, there are a number of individuals worried about the safety of such vehicles driving around with no human taking the wheel. Luckily enough, Google seems to be thinking along the latter group’s lines based on a patent which has come to light recently.

The new patent talks about a applying a flypaper-like adhesive material on the front bonnet of the car to make sure a pedestrian sticks to the vehicle in case of an accident. This might sound like a crazy idea, but the company makes a compelling argument for its effectiveness.

First-off, Google’s mechanism would ensure that the person doesn’t get thrown away from the car onto a hard surface or another automobile. This makes sense given the fact that collisions themselves don’t cause the maximum amount of injury, with the real damage getting done after its impact sends someone flying to something worse.

Also Read: Get paid by Google for testing its self-driving car in Arizona

One major problem with sticking flypaper on a car is that it could lead to non-human things like dust getting attached to it. There’s no need to worry too much though, since Google has prepared a solution for this in the form of an eggshell-like layer which is supposed to break on impact when catastrophe strikes.

While all this takes care of ensuring the pedestrian is safe, there is the question of how exactly a person would get off the car. Google proposes using a releasable adhesive which would break the victim free off the flypaper’s bonds after a period of time. This sounds pretty uncomfortable, not to mention messy, but that could be the price society has to pay for safety.

As for whether this patent will ever come to fruition, a Google spokeswoman stated that the company holds patents on a number of ideas. Some turn into real products and some don’t. We’ll just have to wait and see whether cars with pedestrians stuck on its bonnet becomes a common sight in the future.