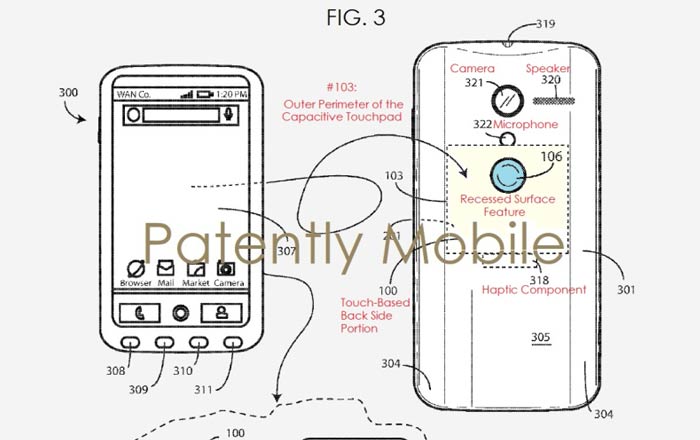 Google might be planning something big for a future Pixel phone if a newly-approved patent is any indication. The document discusses a new touch sensitive surface on the back which offers additional modes of operation.

This area would be housed within a distinctly recessed touchpad. The idea is that a Pixel user could use the rear-facing touch surface to control what’s going on in the screen. This way, fingers won’t obscure the display.

One embodiment sees the area using capacitive technology to detect touch, but Google is keeping its options open to tech like a surface acoustic wave touch sensor, infrared grid sensor, resistive touch sensor, optical imaging sensor, and acoustic pulse recognition sensor. It’s an indication that the company hasn’t quite nailed down what this innovation could be used for.

Google’s patent does discuss possible uses that depend on which app is open. For example, a person could control volume in the music app or pinch to zoom in the camera or browser app. They could even scroll down a webpage or browse through an eBook without their fingers getting in the way.

Patently Mobile mentions that the concave area is surrounded by a general touch area which could accept customized gestures like a circle to trigger a specific function. Google filed the patent a year ago and was granted it last week. It’s unlikely the feature will make its way to the Pixel 2, but perhaps a future model could incorporate it.