As we all know, the large number of astonishing things Google Now automatically presents you with every now and then makes it an incredibly useful tool for Android and iOS device users across the world. The developers behind it quietly keep adding new features to surprise us with fresh cards, one among which has just come to light.

It’s called the flight price monitor, and its aim is to keep track of your potential journeys to inform you when the price of a relevant flight has been dropped. This is a pretty useful card for those constantly on the move. With such information, they can immediately book their tickets as soon as the price is lowered by the air companies. 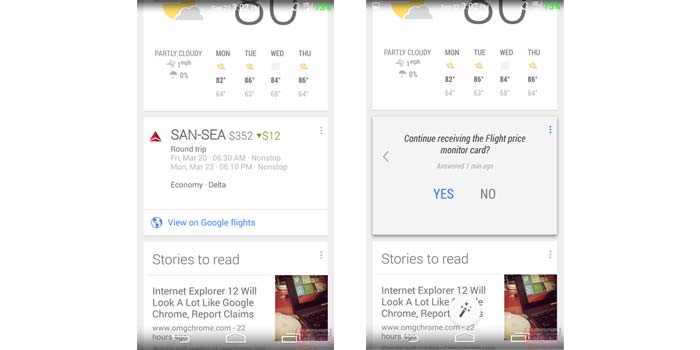 As has been disclosed by Android Police, it works based on information you’ve pulled from the Google Flights portal. There’s no word out right now regarding whether or not it works on details grabbed from other travel websites. As can be seen in the picture above, the amount by which the price has dropped is displayed by Google Now as well.

A bevy of such amazing attributes are regularly thrown the way of Android and iOS users by the Google Now integration of the Google Search app. These include the recently introduced card which is aimed at reminding you about products you’ve researched online and the card that automatically determines where you parked your car, so that you can navigate easily towards it when in a hurry.

The new Google Now flight price monitor is live now, and is should automatically get triggered once you’ve searched for something on the Google Flights portal.