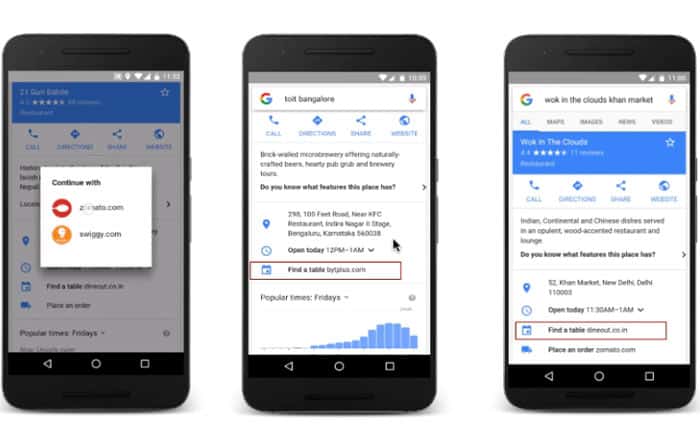 Scores of people nowadays utilize Google as a way to search for places to eat before heading to another link in order to place an order or book a reservation. The search giant is now rolling out a brand new feature which lets users do so right from the search results.

Anyone who uses Google to search for a nearby restaurant from their handset starting from today will be greeted with a new ‘Place an order’ option in the results. Tapping on it will trigger a window which asks them whether they want to place an order via Zomato or Swiggy. Once they pick a service, they’ll be taken to that platform’s website to complete the order.

Google has only tied up with Zomato and Swiggy for food delivery as of now. It plans to add more partners in the future. Even the new restaurant reservations option suffers from the same fate, with the company only joining hands with Dineout and Bytplus to help users book a table ahead of time at present.

In related news, Google recently announced that it was planning to extend its Accelerated Mobile Pages (AMP) project to all search results instead of just being restricted to the Top Stories carousel. The feature allows pages to load much faster than usual. While it was initially focused on news, its reach has now expanded to recipe sites, entertainment and travel.

Google says the new food-focused features have just started rolling out for Google Search and the Google app for iOS and Android, so it might take some time before you can access it. It’s looking to evolve the look and feel of the tool over time.