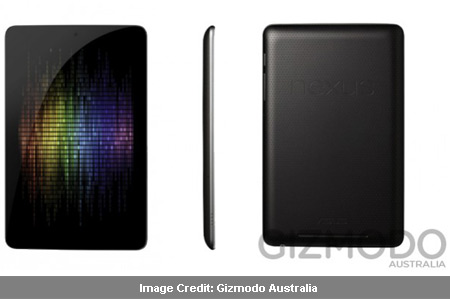 The rumored Google Nexus 7 tablet appears to be all geared up to steal the spotlight from Apple and Microsoft by making its big appearance this week at the Google I/O conference. What’s more, specifications and press shots of the slate have even surfaced, providing a detailed view of Google’s homegrown slate.

Gizmodo Australia managed to get their hands on a leaked training document which apparently possesses a list of specifications and other information about the tablet. This Asus-Google co-developed slate fits in an IPS display proffering a 178-degree viewing angle and resolutions of 1280 x 800 pixels through a 7-inch touchscreen. A quad core Tegra 3 processor clocked at 1.3GHz is in charge of the heavy lifting, while the 12 core GeForce GPU and 1GB of RAM help lighten the load.

The device is expected to arrive pre-loaded with the Android Jelly Bean OS which was recently leaked for the Galaxy Nexus smartphone. Google plans on offering the slate in 2 variants, 1 bearing 8GB of integrated storage and the other fitted with 16GB of built-in hoarding capacity. NFC and Android Beam are likely to get featured as well, along with a 1.2MP front-facing camera. Complementing all these is a battery life that should be capable of delivering up to 9 hours of activity.

The Google Nexus 7 release date is speculated to fall sometime next month, while the tablet is expected to be officially unveiled at the Google I/O conference, as stated earlier. The slate should carry a $199 price tag for the 8GB variant or $249 for the 16GB version.