The Google Nexus 7 2013 edition went up for sale in India last month along with the Nexus 5 through the Play store. And now Asus and Google have announced that the device has been made available through multiple leading stores across the nation. Its price continues to be the same.

This new edition Nexus slate obviously is an improved version of its predecessor and as the name suggests, tags along a 7-inch touchscreen of 1920 x 1200p resolution. It makes the most of the IPS technology to provide a wider viewing angle and has a pixel density of 323ppi. Also, the display’s brightness is said to be of 400 nits which should make it apt for outdoor use, even in bright sunlight. 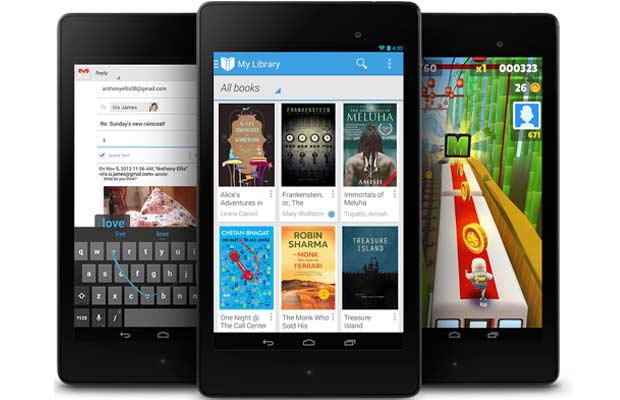 Although it runs the Android Jelly Bean 4.3 OS out of the box, the company has already started rolling out the KitKat 4.4 update for it. The grapevine is also abuzz with speculations suggesting that the version 4.4.1 will be beamed out for the device very soon.

The Nexus 7 sports a 1.2MP webcam as well as a 5MP primary camera with flash. You will find SonicMaster speakers on the tablet which is deployed with Fraunhofer Cingo virtual surround sound technology. In addition to all this, the device integrates a quad core 1.5GHz Qualcomm Snapdragon S4 Pro processor and 2GB of RAM.

The 16GB Wi-Fi-only Google Nexus 7 2013 edition costs 20,999 and its 32GB LTE version has been priced at Rs 27,999. It is now available through retail channels like Croma, Reliance Digital and Vijay Sales amongst others.