The Google Nexus 6 smartphone is by far one of the best flagships on the market, but it isn’t without issues. Battery problems have been plaguing the device for quite some time now where the power pack swells up and causes the rear panel to separate.

Well, scary as that is, someone recently faced the worst outcome. The Google Nexus 6 smartphone reportedly ‘blew up’ and sustained damages which have left it unusable. Now, this is quite common when users get irresponsible and use third-party chargers to juice up their devices, but that isn’t the case here.

As it turns out, the Motorola-made smartphone was just lying around when the incident took place. It wasn’t being used and neither did the owner plug it in to charge. And this is what makes the situation scary. On the upside, the battery didn’t cause a fire or damages to anything else apart from the device. 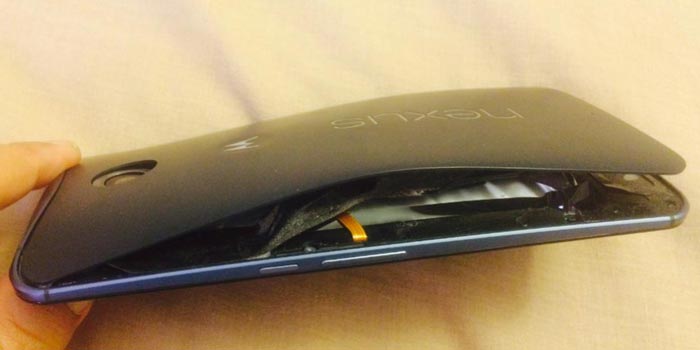 The image you see above was posted by @jasuja on Twitter showing the aftermath. Motorola India was quick to respond to the issue and is in touch with the owner, but we still don’t know what really cause the explosion.

Reports of the Nexus 6 having a swollen battery have been around from a few months now and the company is offering replacements, but even substitute units apparently face the same issue. The 3220mAh power pack is one of the phone’s key features and it failing is a huge concern.

Let’s hope that Motorola manages to find the reason behind the battery swelling soon before any more Nexus 6 devices suffer the same faith as the one above.