Citing a research conducted over the period of one month, GlobalWebIndex has reached the conclusion that Google Maps is currently the most used smartphone application in the world. This mapping service from the search engine giant was used by 54 percent of the global smartphone consumers in the last month. Second on the newly revealed list is the Facebook mobile app which was employed by 44 percent of the world population for their social networking needs.

Apart from giving us numbers to crunch on, the study has also brought forth an interesting observation. While Google Maps enjoys a lion’s share of in the consumption of applications, its competitors Apple Maps and Nokia Ovi Maps have not even made it to the top 10. The flawed initial release of Apple’s service is largely to be blamed for this. On the other hand, in spite of not making it to the top 10 list, Ovi Maps’ usurpation of the number 11 spot does speak a lot about the relatively unpopular service. 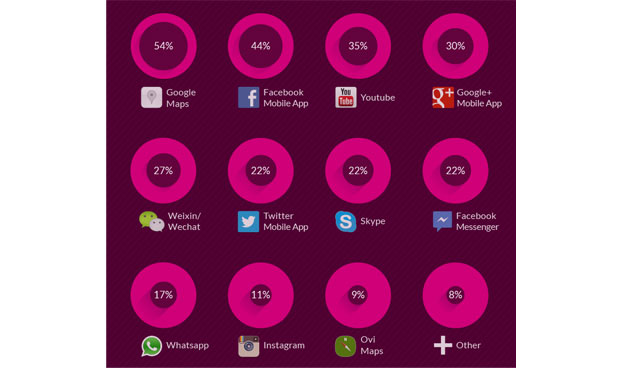 The grabbing of the second spot by the Facebook Mobile app is no surprise, and according to the survey, 44% of global smartphone users utilize it for their benefits. Number 3 and 4 are occupied by YouTube (35%) Google+ (30%), whereas Weixin/WeChat grabs the number 5 spot, ahead of WhatsApp which has been placed at number 9. Furthermore, Twitter’s mobile application sits steady at the sixth spot, with Skype and Facebook Messenger settling for the seventh and eighth places. The top 10 list is rounded up by Instagram which clutches the last spot.

The dominance of Google Maps has been proved time and again, and the mapping service’s latest overhaul has made it an even more convenient tool to use.