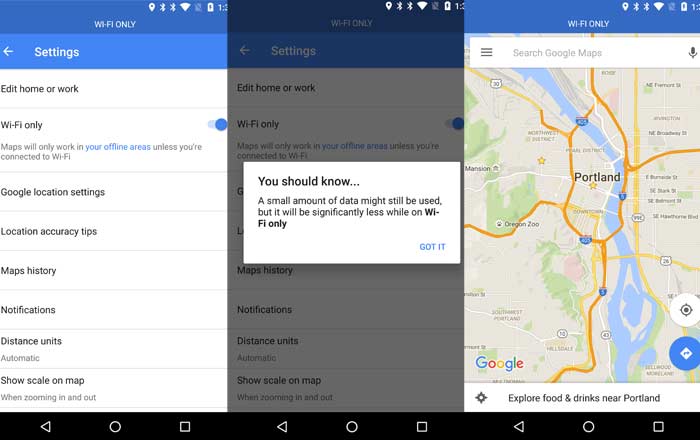 Google Maps is all set to get a new Wi-Fi only mode which will help users cut down on their data costs. The feature has been spotted among a small group of users, but hasn’t been officially announced yet.

People are reporting that the new Wi-Fi only mode can be found under Settings, replacing the previous Offline areas option. Once toggled on, Google Maps warns them that a small amount of cellular data might still be used. However, it will be significantly lesser than what was consumed before.

Introducing a Wi-Fi only choice should be welcome news to people who don’t want to eat up cellular data when Wi-Fi is available. The present offline areas mode switches online automatically when it catches a signal, so the only way to completely cut off cellular data is to do so manually.

According to Android Police, Google is also planning to release a new customizable notifications feature for mass transit delays. The tool allows individuals to pick and choose which buses or trains they want to get alerted about. It may not be ready for a wide rollout yet though, since one user observed that the screen disappeared after Maps was re-launched.

Moving on to some official news, Maps has been given a major design facelift for a cleaner look with fewer distractions. It now boasts of a subtle color scheme to help people easily distinguish between things like man-made and natural features, in addition to helping them quickly locate hospitals, highways and schools.

Google Maps has also gotten a new areas of interest feature which shades such places in orange. The main idea behind it is to help consumers find popular places easily, especially if they’re new to the region.