Google Maps for Android has been blessed with a pretty hefty update that has brought the ability to take voice commands while navigating, among other things. This upgrade is live now on the Play store and should start appearing on you devices soon.

When you’re driving while navigating to a particular destination through Google Maps, you’ll be able to ask certain relevant questions to the app from now on. This can be done by tapping a new microphone icon that appears just above the bar at the bottom. 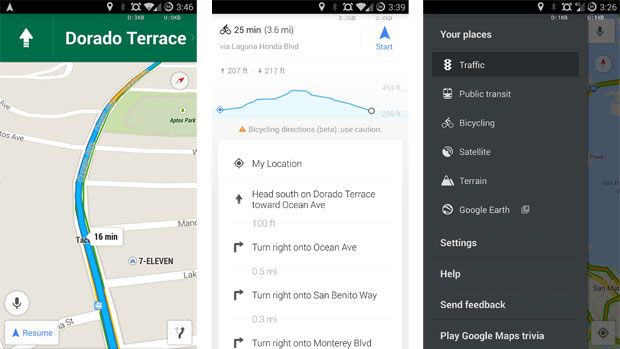 Queries which you will receive answers to include ‘how long until I arrive?’, ‘what’s my next turn?’, ‘how is the traffic ahead?’ and more. The annoying part however, is that you cannot trigger the voice actions without touching the device.

As Android Police points out, Google Maps has also received a few upgrades to its biking features. If you choose the biking option, the elevation on the chosen route is shown to you along with alternate routes, so you can choose the one which is less tiring or if you’re up for it, the most tiring.

Furthermore, Google has enhanced Uber support by showing the service’s card in the car tab of navigation as well, instead of just showing it in public transportation and walking tabs. Additionally, ‘Your Places’ has migrated to the slide-out menu in order to facilitate convenient access.

The rollout of this Google Maps update has begun through the Play store, but as is always the case, some might have to wait for a few more days to get it on their devices.