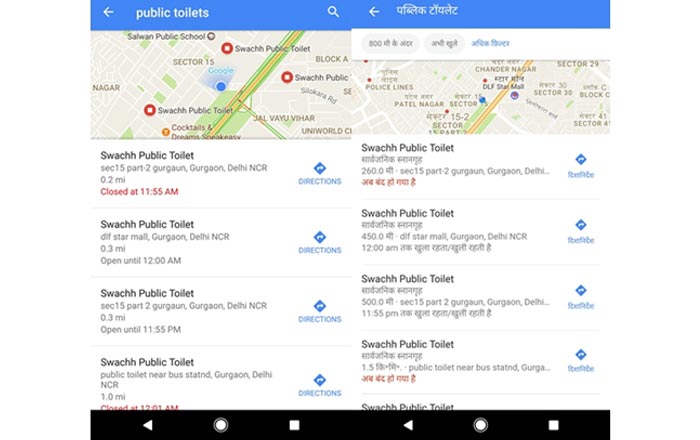 Google will now help Indians in search of a loo near them with a new toilet finder feature embedded within Maps. The tool had initially come to light back in November this year and has now been officially announced by the company.

Only people located in Delhi-NCR and Madhya Pradesh can access this feature as of now, specifically in Ghaziabad, Noida, Gurugram, Delhi, Indore, Faridabad, and Bhopal. They’ll be able to search for restrooms in their vicinity by typing public toilets in Google Maps. The results will be showcased in both English and Hindi.

Each listing is supposed to be accompanied by an address, distance from the user’s location, and working hours. Individuals will also be able to bestow star ratings on lavatories to help others decide whether it’s worth visiting.

Google’s toilet locator is available via the Android, iOS and desktop versions of Maps. It’s been launched in collaboration with the Ministry of Urban Development (MoUD). The search giant has managed to include nearly 4000 communal and public toilets thanks to the tie-up.

Google plans to add more areas to its toilet scanner in the future. A previous report had hinted that the tool could spread to a total of 2041 urban local bodies (ULBs) in the long run. It’ll probably prove to be a pretty useful feature once it catches on. People won’t have to wander around in search of clean restroom near them and can make informed decisions about which one to head towards.

You can download Google Maps via the Play Store or App Store.