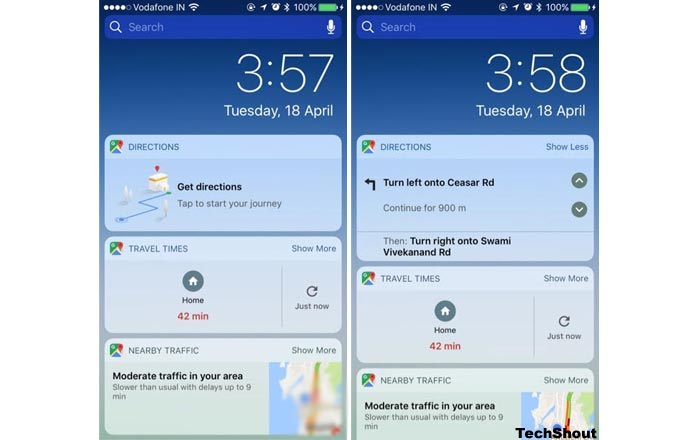 Google Maps for iOS has gotten a major update which allows it to integrate itself more fully into the operating system. Users can now access turn-by-turn navigation straight from the lockscreen and share their location via iMessage.

Turn-by-turn navigation is possible through Google Maps’ new Directions widget. It can be accessed by swiping left on the lock screen. To utilize it, a person would have to set their start and end point in the app. They can then proceed to scroll through a list of text informing them about upcoming directions in the widget.

Previously, individuals would have to unlock their phone or rely on push notifications to get an idea of which turn to take. Apple’s own Maps app has been offering lock screen navigation for a while now, so the change should help Google compete better with its rival.

The other big addition to Google Maps is static location sharing within iMessage. This is again something which was previously only limited within the main app. Now iMessage users can give out their current location by activating the Google Maps applet in the messaging platform.

A mini Maps window opens up within the text field when sharing a location, meaning a person won’t have to leave the app to view the place. As noted above though, a user’s position won’t be updated in real-time since only static sharing is allowed.

You can download the latest version of Google Maps for iOS here.