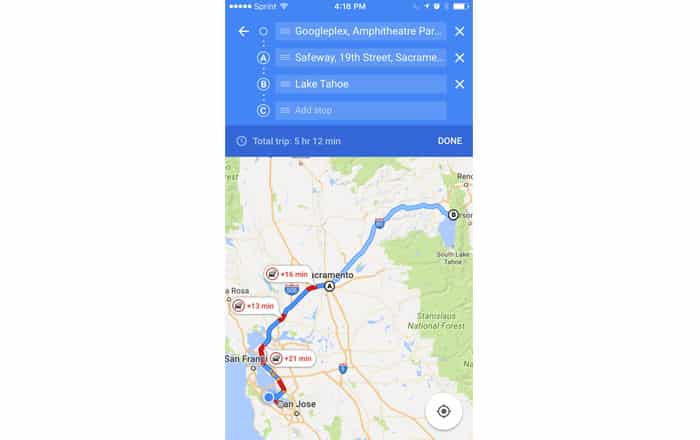 Google Maps has finally gotten around to bringing support for multiple destinations to iOS after debuting the feature for Android back in June this year. The useful new tool is rolling out slowly and should reach everyone within a couple of days.

Being able to add more than one pitstop while planning a trip should make life a lot easier for iPhone owners, especially if they want to follow a route which Google Maps isn’t recommending. The feature even tells them how much time it’ll take to complete the entire outing.

To take advantage of Google’s new multi-stop tool, users simply have to enter a destination, select the corner menu, and tap on Add stop. They can also rearrange the order of the stops by selecting a location and dragging it to the position they want. Once this has been done and dusted with, all they have to do is tap Done and they’ll be able to start navigation mode.

Also Read: Google Maps to roll out Wi-Fi only mode to help you save data

To recall, being able to go from point A to B then C has been a part of Maps’ desktop platform for a long time now. People have been asking for the feature to be added to its mobile avatar for years. In related news, Google has also begun rolling out a new Wi-Fi only mode for consumers.

The new Wi-Fi mode is more or less the new name for the previous Offline areas option. As can be guessed by its name, it makes sure only Wi-Fi data is accessed by the handset in order to help users save up on data costs. However, a small amount of cellular data might still get used up by Google Maps, though it will be significantly less while people are utilizing the feature.

You can download the updated Google Maps for iOS via the App Store.