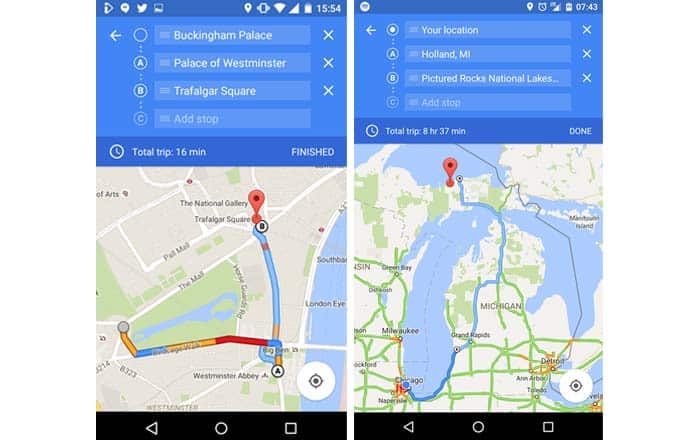 Google Maps is finally getting support for multiple destinations in its Android mobile app, an in-demand feature which users have been requesting for years now. The feature first appeared in a beta release last week, but didn’t actually allow anyone to take advantage of it.

It looks like Google Maps is now ready to roll the tool out to more people now as the feature has started reaching some end users. It’s exciting news for consumers given the trouble they had to go through previously to figure out the best way to reach more than one place in a single journey.

Maps had previously let individuals side-track their journey to visit gas stations, grocery stores or restaurants, but did not offer true multi-waypoint directions. This has changed now thanks to the new update, as they’ll now be able to add multiple stops, represented by the letters A, B and C in the images above.

Also See: Google Earth and Maps imagery is now way richer than before

The function even tells users how much time the entire journey will take, a useful piece of information when planning an outing. Adding additional pit stops has been a feature of the desktop version of Google Maps for a while now, so it’s nice to see the brand is finally extending support for the tool to other platforms.

Moreover, the ability to add multiple destinations could also prove to be helpful in situations where the road a person wants to travel by isn’t suggested by Google Maps. Consumers could simply add the path as one of their stops and then continue on to their final endpoint.

Android Police thinks the support for multiple destinations will probably get activated by a server-side switch rather than a full-blown update to Google Maps. In that light, it’ll probably take some time before it reaches everyone. There’s no guarantee that updating to the latest APK will activate it, but you can try to nonetheless by visiting APKMirror.