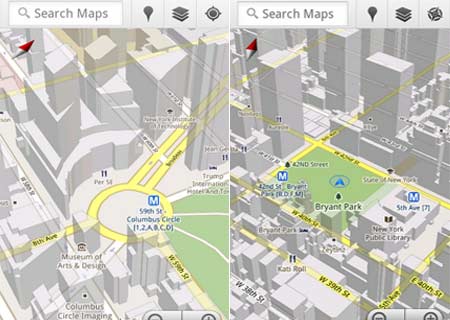 A little more than five years ago Google stamped out the desideratum to carry a paper map while junketing. Since then, many features have been introduced to improve the same. According to the official Google Mobile blog, the company now announces Google Maps 5.0 for android integrating 3D interaction and offline reliability.

So far, the application has always downloaded the map as a set of small, square images that the traveler stitches together to procreate the map they see. Now onwards, Google will employ vector graphics to dynamically draw the map on their device as they use it. Users can conveniently drag down with two fingers to tilt the map.

Twisting with two fingers will rotate the map while rotating them will put forth a new perspective from any direction. The new version also brings smooth zooming and compass mode. Users can center the map on their location and the tap the compass button in the top right corner. The map will flip into 3D mode and start rotating to match their perspective, while still keeping all the labels upright and readable.

Under the offline reliability, Google Maps will now automatically start caching the areas that users visit the most when their device is plugged in and connected to Wi-Fi. The team at Google is also endeavoring to ameliorate the algorithms and technology behind these features. With this, users can look forward to see maps work better in more offline situations.

Along with this, the latest offline routing will make users quickly get back on their track if they miss a turn along the way, but a connection will be required to start a route. The companies will be rolling this feature out gradually over the next few weeks.

Users can now download the new Google Maps 5.0 for Android by searching for Google Maps in Android Market. Android 1.6+ devices can get Maps 5.0, but 3D and offline features require Android 2.0+, and some features may not be supported for all devices or countries.