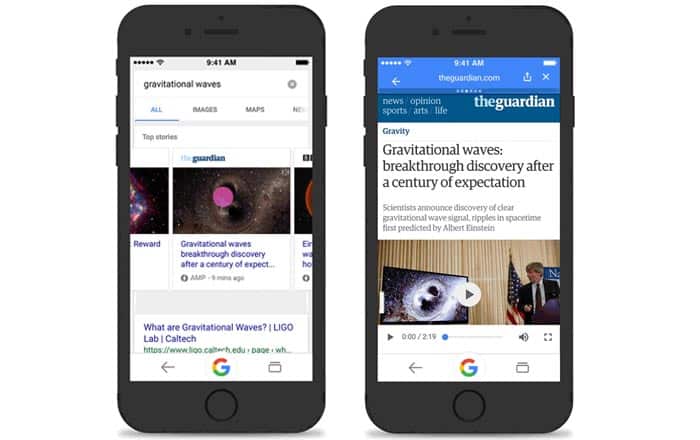 Google Search in your iPhone has now gotten a lot faster thanks to the company’s latest update for its iOS app. The brand has managed to cut loading time to a fraction of what it was before so you can get the answer to your queries at lightning-quick speeds.

Google goes as far as to claim that all its app users will save a combined 6.5 million hours from the small improvements it’s made, although it’s possible they might not even notice the difference. The new-and-improved search engine will also load news articles faster due to the power of Accelerated Mobile Pages (AMP).

To recall, AMP was first introduced for mobile web browsers a few months ago. The feature is now making its iOS app debut. It’s similar to how Facebook’s Instant Articles platform works. Any publisher which supports the tool will let you access articles almost instantaneously.

To check if the site you’re visiting supports AMP, you’ll have to look out for Google’s lightning bolt symbol and the term AMP next to the article within the Top Stories section of your search results. The update also introduces the ability to play sports highlights directly from Now cards.

Google says the new feature supports NBA and NHL playoffs, in addition to the upcoming Olympics. It’ll probably expand to other sports as well in the future. It should prove to be pretty useful, allowing consumers to directly watch videos within the app.

Speed is the theme for Google’s other additions as well. iPad users can now utilize keyboard shortcuts through their external keyboard to navigate search results more rapidly. They’ll be able to check out the list of supported shortcuts by holding down the Command key.

The updated Google app for iOS is now live over at the App Store.