In an expected and quite awaited release, Google has launched the official I/O 2014 app for its developers conference slated to take place later this month in San Francisco, California. You can download it for free through the store, and it should prove to be extremely useful if you’re going to attend the event in person.

If you’re not planning to land in San Francisco but are still interested in what’s happening there (we’ll be bringing you all the latest by the way), Google has taken care of that as well. A feature in the application lets you remotely attend the gathering by viewing presentations on your Android devices. 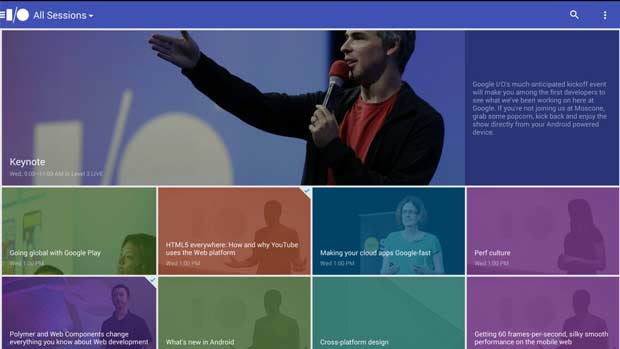 Overall, the app is neatly built with a tiled layout and a pull-out drawer. It consists of a personal scheduler as well, apart from detailed information related to all topics, speakers and partners. Through the official Google I/O 2014 app, you can get reminders, watch live-streams of keynote sessions, view detailed maps of the venue and more.

We aren’t sure what Google plans to unveil in this conference, but there are too many rumblings about a Nexus 8 arriving with Android 4.5 (Lollipop?) onboard. And that’s not all; recent banter has also indicated that a Nexus 6 could make an appearance at the show, but possibilities of that happening are quite slim according to us.

Here’s the Google Play store link if you wish to download the Google I/O 2014 application onto your Android devices. This developer extravaganza will be a two-day affair which is slated to begin on June 25.