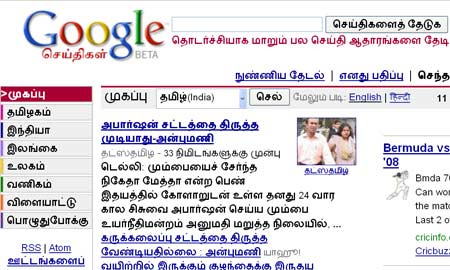 Google in India has always put a lot of emphasis on reaching a wider audience by offering its services in regional languages. Google India today announced to introduce a new edition of Google News in Tamil and Tamil transliteration on Google Search, Blogger and Orkut.

Google News in Tamil gathers news from various Tamil news sources on the web and presents an automatically generated summary with links to the most significant stories. Google News India is already available in two other languages including English and Hindi.

On the other hand, Google Tamil transliteration on various Google products will enable users to enjoy Tamil script with the existing keyboard. Google’s transliteration technology allows the conversion from English text to phonetically equivalent text in Indian languages. In a nutshell, using transliteration users can type “vanakkam” which would automatically be converted in the Tamil script. Google search Tamil is also empowered by this technology. Users can type in English and get the search results in Tamil.

In the same manner users can also enjoy writing their blog in Tamil using blogger and communicate with friends in their native language on Orkut.

With the new features, the large Tamil speaking population in India will enjoy the ease of grabbing the news in their mother-tongue.