The folks over at Mountain View have infused some new additions into the Android version of the Google Hangouts app, thus further enhancing its attributes. A new system for merging text messages and Hangout conversations has been introduced through an update, while there’s also a fresh homescreen widget for users to take advantage of.

Google has announced through a blog post that the Hangouts app will now place texts and chats into a single conversation provided they are from the same recipient. Switching between the two types when you wish to send a message will be made possible by a simple flip switch on the screen. 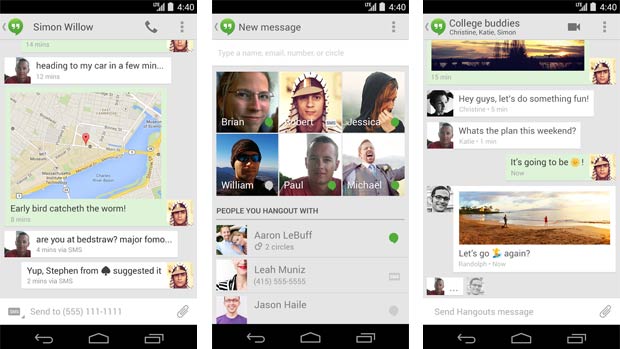 Hangouts 2.1 for Android adds two more sections to its contacts menu. While one is for people you Hangout with, the other includes phone contacts, making it easier for you to send text messages. As mentioned above, there’s a homescreen widget in this updated app as well, aimed at letting you access your chats instantly.

It has been revealed that the new Google Hangouts app will facilitate better quality video calls, among other things. The update is live now on the Google Play store, and if you haven’t received a notification to download it yet, head on over to this link in order to get it on your Android devices.

Facebook
Twitter
Pinterest
Linkedin
ReddIt
Tumblr
Flip
Previous articleFacebook’s new Nearby Friends feature notifies you when your friends are around
Next article500 million and counting: WhatsApp now caters to half a billion users around the globe