In wake of a recent revelation regarding a malicious Android app that was purchased by more than 10,000 people, Google has introduced a new security measure for its operating system. This new feature is an extension of 2012’s Verify Apps attribute which notifies you when you’re installing potentially harmful software on your devices.

It continually keeps scanning your devices for anything undesired, thus increasing the security furthermore. It will be made available for devices running Android 2.3 and up. 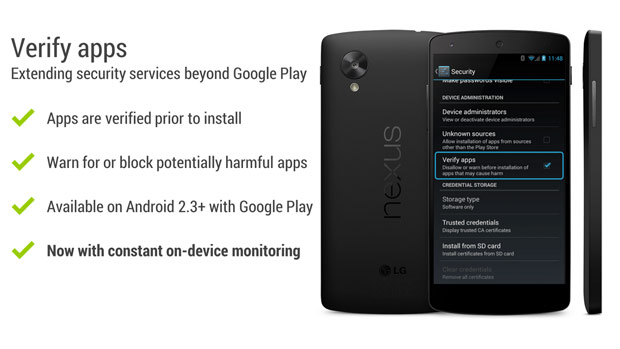 Back in 2012, Google had taken the first step towards such a security measure by introducing Verify Apps which warns people when they try and install apps from outside of Google Play. The search giant claims that this feature has been used over 4 billion times by Android users from around the globe.

This particularly applies to those who like to play around with their software by side-loading apps or downloading them through third-party app stores. Such people seem to form a very small amount however, as Google is saying that most folks ‘never see a warning’ on their phones or tablets.

The company has also noted that less than 0.18 percent of installs took place even after the Verify Apps feature warned people against them last year. This new Android addition grabs special significance right now since it was recently discovered that a malicious app called Virus Shield was downloaded by more 10,000 users only to discover that their $3.99 purchase had netted them a scam app.