Live now on the iOS App Store is an update for Google+ which furnishes the social networking utility with features that we recently saw hitting its Android version. Apart from its integration with Google Drive, the app’s new update replaces the Messenger section with the new Hangouts chat service. Moreover, several other changes also make their way into the software, as mentioned by Frank Petterson through a post on its own Google+ page.

The integration of the app with the Internet giant’s cloud storage tool means that all the photographs and videos which you horde into your Drive accounts will now be made available through Google+ as well. This way, you don’t need to switch apps in order to upload or share something from your Drive accounts. Moreover, support for features like domain-restricted posts in Google Apps for Business has also been introduced through this iOS update. And in addition to Reviews and Videos tabs, profiles will now posses the ability to start Hangouts or share private posts directly. 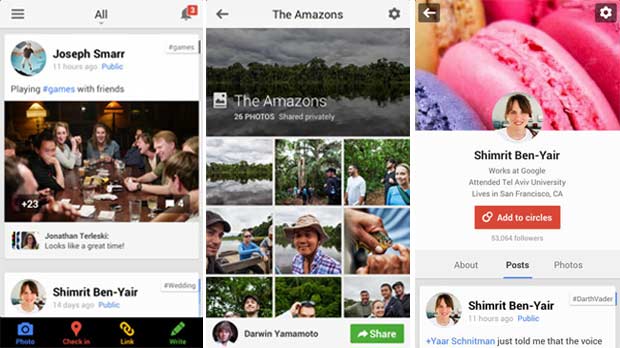 Lastly, you will notice that the old Messenger section of the Google+ application will be replaced by Hangouts which can be utilized for messaging and video calls. Those who wish to retain their old Messenger conversations will be able to do so using Google Takeout. It was only two days back that the same new features were introduced by the search engine giant to its Android version as well.

The Google+ update for iOS is live now on the Apple App Store, and you can download it on all your devices running iOS 6.0 or later.