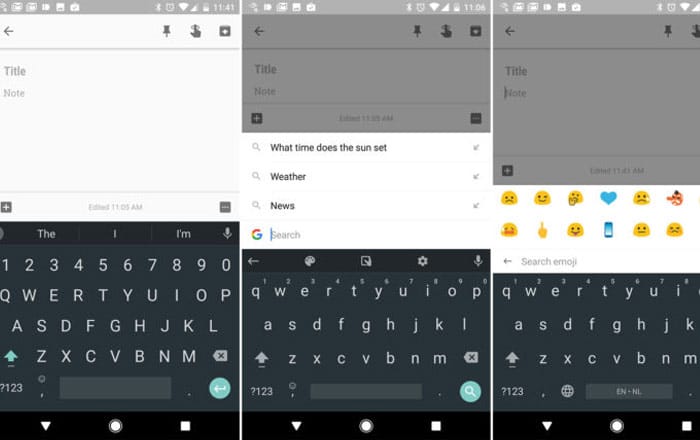 Google’s Gboard keyboard has been an iOS-only app for over 7 months now, much to the annoyance of Android loyalists. The brand has finally decided to roll out the application to the latter group now.

However, instead of outing a standalone Gboard app, Google has chosen to replace the existing Google Keyboard with it. Version 6.0 of the second officially brings about this name change and adds a slew of features derived from the first.

The newly-christened Gboard for Android tool works just like its iOS equivalent. Users can take advantage of it to search Google without having to leave their keyboard and insert GIFs into conversations. Answers to questions appear in the form of cards, locations, or links, all of which can be directly shared in a chat.

Also Read: You can now tweet emoji at Google to get search results

The ability makes it easier to find information faster since people can use it to search for restaurants or movie screenings nearby. Android patrons can tap the Google logo on the top-left to go into search mode or pull up one-handed mode, Gboard settings, and themes when the G button is not enabled.

The ability to send GIFs directly from a keyboard was notably added as a key feature in the Android 7.1.1 Nougat update. The skill is currently supported by a number of Google apps like Hangouts, Messenger and Allo. Third-party tools like Twitter and Slack don’t support it yet.

Gboard also brings with it an optional dedicated number row along the top of the keyboard, support for up to 3 active languages, and a rearranged emoji panel with group selection at the bottom. Google’s also renamed Gesture typing as Glide typing and redesigned emoticons so they have a bright halo effect around them.

Gboard hasn’t hit the Play Store officially yet. You can try it out on your Android device by installing it as an APK via APKMirror.