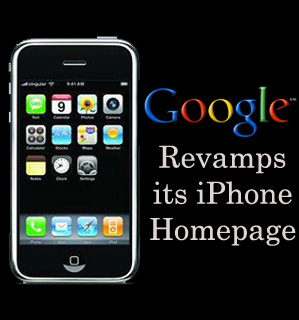 MacWorld Monday saw Google announcing that it is in the works of revamping its comprehensive Google application for the iPhone, enhancing the user interface and speeding up loading times.

According to Google, the new UI is ideal for the iPhone’s touchscreen capabilities, and apparently the speeds of applications such as Gmail and Calendar have also increased. In addition, the iPod+mobile phone concoction device’s users will also be able to customize Google applications on tabs on the Google.com menu bar. The customizable tabs include Gmail, Reader, Calendar and Picasa. So in short this implies that iPhone users can now access these Google applications by signing in just once.

Gmail has now been improved further wherein users will also not have to refresh the page everytime they receive a new email in their inbox. Furthermore, the application is now capable to auto-complete e-mails like its desktop sibling. A month view option has also been integrated in the Calendar application, through which users can view a month’s worth of appointments.

And it doesn’t end there, with the new UI users get the advantage to customize the tabs that they want should appear on their iPhone Google homepage.

Though as of now, these newly enhanced features are only available to customers across the US, the company intends launching it in other countries soon.

The reworked Google homepage can be accessed from the iPhone Safari browsers.

Just around a month back, the Google iPhone Application was announced and in addition the iPhone also started offering support to Picasa Photo Service.