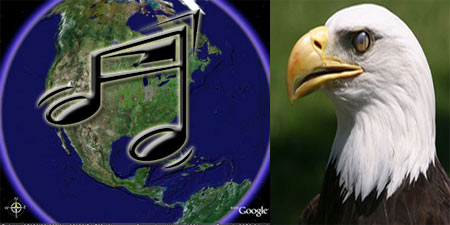 Google has sent word that it will be adding sound effects to its 3-D virtual globe program, Google Earth. Now, you will be able to hear the haunting whale song as well as bird songs and much more.

Google Earth allows users to zoom in on any spot on the planet’s surface. Web users will soon be able to eavesdrop on sounds in the Brazilian rainforest or even Arctic ice crashing into the sea.

In fact, musician Dr.Bernie Krause has spent over 40 years collecting more than 3,500 hours of sound recordings of more than 15,000 animal noises, and sounds from a huge array of habitats, including cities, deserts, mountains and the marine environment. It is the largest library in existence of natural sound, he said.

Dr.Bernie Krause’s company Wild Sanctuary in Glen Ellen, California, has now created software that will embed these sound files into the relevant locations on Google Earth.

It is interesting to know that Dr.Kraus is a former member of the legendary sixties folk group called The Wavers.

“Our objective is to bring the world alive. We have all the continents of the world- high mountains and low deserts,” said Dr. Bernie Krause.

He hopes that it will make virtual visitors more aware of the impact of human activity on the environment in the years since he began making and collecting the recordings. This means that anyone can carry out a detailed exploration of their chosen spot, after which they can also listen to the local sounds to match.

What’s more, users will be able to hear various modern-day sounds at a particular location. They can then travel back in time and compare them with the noises of years gone by.

Dr.Krause plans to have this software ready with 26 sounds doe demonstration at a new technology conference in San Jose, California on May 29, 2007.

Yet another project called Freesound, makes contributors’ sound file available on Google Earth. However, unlike these recordings, Dr.Krause’s sound files are of consistent quality and enriched with the time, date and weather information.