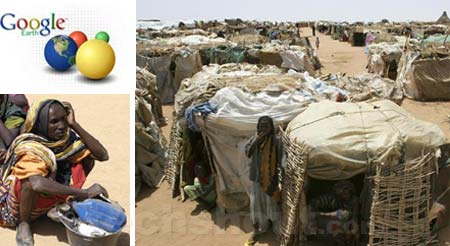 Yesterday, Google’s online satellite imaging site Google Earth announced that it would be adding features that allow users to zoom in on the crisis in Sudan’s Western Darfur region. Sadly, since 2003 more than 200,000 people have been killed in strife-torn region of Darfur, and some of this carnage has been detailed by Google Earth.

Google is working with the US Holocaust Memorial Museum in a joint project, in which the search giant has updated its Google Earth service with high-resolution satellite images of the region to document destroyed villages, displaced people and refugee camps.

When Google Earth users scan over the Darfur region, Google hopes to attract their attention to the specially placed icons. The icons represent destroyed villages with flames, and refugee camps with rents.

Thus, when a user zooms in to a level of magnification, the icons seem to indicate that much of the Darfur region is on fire. By clicking on a flame icon, a window opens showing the village’s name and the statistics on the extent of destruction.

Besides, Google has also enhanced the resolution for certain areas of the region so users can zoom in to see the burned remains of houses in Darfur.

Not only that, the online maps of the Darfur region also include an icon that links to a presentation by the Holocaust Museum on the crisis in the region, which includes photos, videos, historical background and testimony on the disasters that have taken place.

In the future, Google has said that it will periodically update the images of the Darfur region as seen via Google Earth.