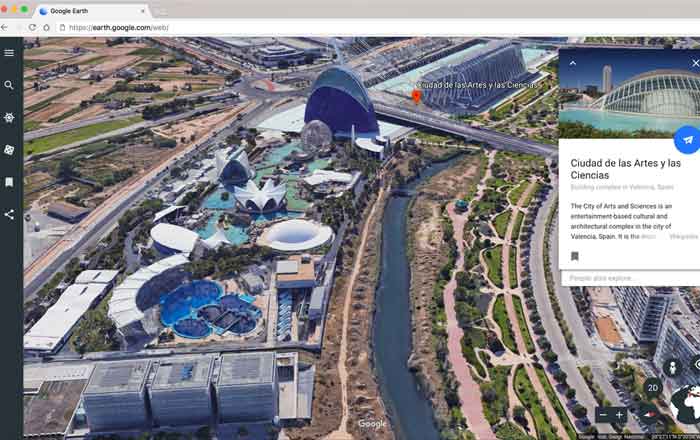 Google Earth has gotten its first major update in nearly 2 years, breathing new life into the globe-trotting platform. The entire user interface has been overhauled into a cleaner look that makes it easy to discover and explore new places from a birds-eye view.

The new Google Earth brings with it a new Voyager showcase that basically serves as guided interactive tour of various locations and cultures, spinning the globe and zooming in on a particular point as the narrative progresses. The company’s tied up with a number of organizations such as BBC Earth to create 50 stories and plans to add more on a weekly basis.

Google’s also added an “I’m feeling lucky” button for those who’d like to go somewhere random. There are over 20000 spots they could land on. Once there, they can open a Knowledge Card to get brief a summary of the history and facts of that place. They can further choose to view the place in 3D, a more detailed version of the satellite imagery seen in earlier iterations.

Google Earth’s 3D maps currently cover tourist hotspots like the Grand Canyon in the US and Château de Chambord in France. Individuals who want to share what they’re looking at with others can now send a Postcard to their friends. The missive contains an image of what they’re exploring and a link to join them.

Other than the regular version of Google Earth, Earth VR is also getting a much-needed update. Users can now search within the platform to find places faster. The brand’s also added 27 new locations to explore including the likes of the Neuschwanstein Castle in Germany and Table Mountain in South Africa.

Google Earth is now live on Chrome and will hit Android later this week. iOS and other browsers are set to gain support in the near future. Earth VR is available for free in the Oculus Store and Steam.