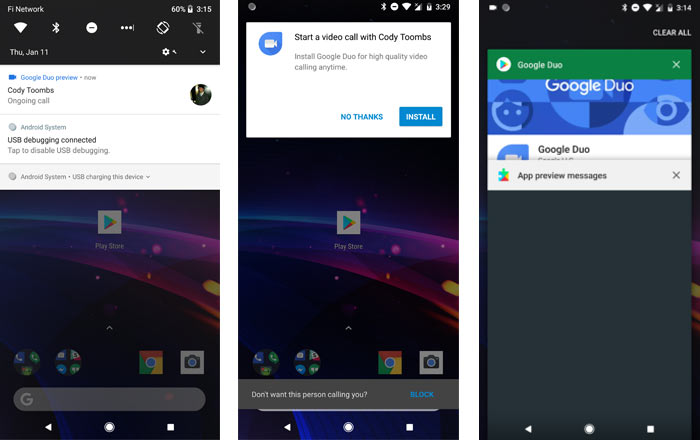 Google Duo has been around for a long time, but there’s one major hindrance that’s stopping it from becoming even more popular – both parties have to have the app installed on their phone to get chatting. In a surprise move, the search giant has managed to circumvent this particular hiccup in its latest update.

A couple of people have begun noticing that they can make calls to friends who aren’t aboard the Google Duo train. The interface is pretty much the same on the other end, even incorporating the app’s Knock-Knock video preview feature. They can either choose to pick up or reject the call.

If the contact navigates away from the call, Google will remind them about it through a persistent notification icon which will instantly bring it back up again. After the video call is over and done with, they’ll see another prompt asking them to install Duo.

They’ll also get a message asking them if they want to block the person who just called. This is a good measure just in case non-Duo users receive calls from people they have no interest in interacting with. The entire process comes across as pretty seamless, with even audio-only calls, the ability to switch cameras, and option to mute mics present.

All this is possible through the magic of App Preview Messaging. Allo is the only other app which supports it, allowing individuals who haven’t installed the application to respond to texts from people who have. Naturally, anyone who doesn’t have an Android device won’t be able to access this feature, leaving iPhone users out in the cold.

It’s not clear just what other criteria is there for the new feature to work though. Some speculate that the non-Duo recipient has to have their number registered with their Google account. They should also have App preview messages enabled in the Google services setting.