The data recently released by comScore as a part of its monthly search engine rankings survey suggest that Google, encompassing all related sister concerns, emerges at the top position in the U.S. The result disclosed five most popular search engines in terms of explicit as well as total core search.

To take a better look at which search engines are progressing according to the numbers, the company compared the December 2011 data with that of November 2011. Explicit core search results leave out contextually driven searches, whereas total core search took into account partner, cross-channel as well as contextual searches excluding only mapping, local directory, and user-generated video sites that are not on the core domain of these engines.

Google held a 65.9 percent market share in the explicit core search category followed by Microsoft and Yahoo! services. Ask and AOL followed in the same order, maintaining their respective market shares of 2.9 and 1.6 percent since November 2011. The explicit core search queries data revealed a 3 percent rise for Google sites. Microsoft jumped up from 2,684 to 2,750, while Yahoo! plunged down to 2,647 from 2,696. 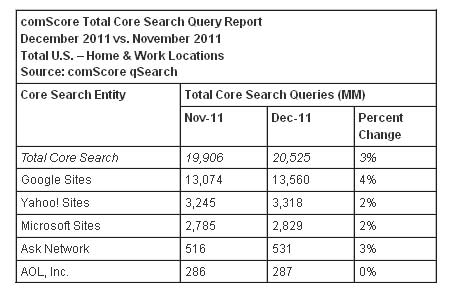 On the other hand, Yahoo! held on to its second position in the total core search group, followed by Microsoft. While Google gained 0.4 percent to stay at the top, Yahoo! lost 0.1 percent of market share in this list. Microsoft lost 0.2 percent and Ask and AOL maintained their respective positions similar to the earlier category. The total core search queries rose from 19,906 to 20, 525, gaining by 3 percent.

This comScore report also disclosed information about organic search results, which again saw Google at the top of the list.