If you’re patiently awaiting the Nexus 7 2013 to arrive in India, then the wait is almost over as the official product website has provided a few more details about its availability. So far, the company has confirmed the arrival of the 32GB model with HSPA+ and 4G LTE support by listing it with a coming soon label and a Rs 26,000 price tag.

There’s no sign of the 16GB and 32GB Wi-Fi models as yet and the search giant is yet to disclose official prices. However, multiple sellers are already offering imported versions where the former is tagged at Rs 22,281, while the high capacity one carries an Rs 26,895 tag. The Nexus 7 2013 is a worthy upgrade from its predecessor. 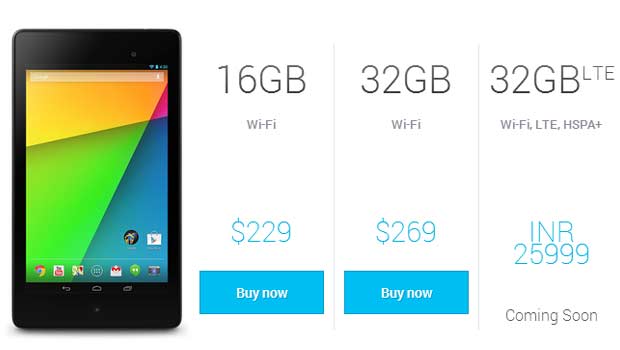 Let’s take a look at the new Nexus 7’s specifications. The tablet still features a 7-inch display, but the resolution has been bumped up to FHD 1200 x 1920 pixels. A 1.5GHz Snapdragon S4 processor is ticking away on the inside in quad core configuration and Google has also thrown in other high-end features such as 2GB of RAM, Bluetooth 4.0, Wi-Fi b/g/n and Android 4.3. Well, you can expect the Indian model to come with 4.4 KitKat out of the box. Apart from these, the slate also packs a rear-facing 5MP camera with 1080p recording as well as a webcam on the front.

We’re still waiting for an official release date for the new Nexus 7. Apart from this, Google will also introduce the Nexus 5 in India soon. The device is already listed on the county’s Play store with a price of Rs 28,999 for 16GB and Rs 32,999 for 32GB.